The forum will be undergoing renovations. You may temporarily lose access to a portion of the forum, but not to worry, those will be restored. More information to come

Less More
21 Oct 2019 06:15 #344676 by CaesarEJW
Experience of Cosmic Consciousness was created by CaesarEJW
Have any of you ever had this experience?

If so, how did it make you feel at the time, and in retrospect, what are your thoughts on this?

It may have been encountered in meditation, prayer, or through much more psychoactive mediums (wink wink).

In basic terms, a profound feeling/understanding of one's true connection to the Universe.

That one is simply a part of the whole, and that though the beauty of the whole may be admired, it is impossible to truly comprehend, because of its seemingly infinite complexity.
That all is connected, because all is one.
That conciousness itself truly permeates everything, more deeply than we can possibly percieve. "Repugnant is a Creature who would squander the ability to lift an eye to heaven, conscious of his fleeting time here". I will share with y'all a tale from one of my psychonautical exploits.

So, psilocybin, 3.5 grams, took a shower, looked to my right at the shower wall, and instead of a wall, I saw an infinite plane of godheads, each head a point of conciousness, each the soul of a living being, be it plant or animal.

I lived in the woods at the time, and was surrounded by trees, and the weird thing is, even though I was inside, there were heads for every single tree around me, each in exactly the right place.

These "souls" were all flowing into and in from the Universe itself, everything seemed to be connected by some extraneous plane of being, one outside of our normal perception.

Then I looked up, and the water from my showerhead was coming from the hands of what I instantly felt and saw to be Gaia, Mother Nature, and I felt simply that I was loved, and everything was loved, for existance in-of-itself is an amazingly complex and beautiful thing, and in that moment I instantly and intuitively percieved the interconnectedness of everything everywhere, and I was overcome with unconditional love and joy for everything, for the Universe.

But there was also a Trickster figure, that took the form of a laughing entity, and I could only see him from the corners of my vision. He played tricks on me, messed with my perception a bit, but it was all in good spirit, and though he frustrated me at first, I soon realized he and Gaia were one and the same, two sides of an infinite and beautiful whole.

And I realize now, he may have messed with my perception to simply show me how fallible and incomplete our natural perceptive capabilites as humans are, yet we foolishly hold them to such a high esteem.
“Muddy water is best cleared by leaving it alone.” - Alan Watts

Less More
21 Oct 2019 07:02 #344678 by TheDude
Replied by TheDude on topic Experience of Cosmic Consciousness
I've had some visualizations of many seats of consciousness in a seemingly infinite plane during closed-eye meditation. One that comes to me often is kind of similar to this: 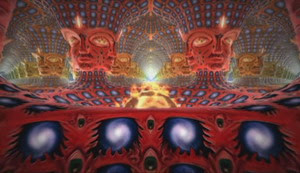 Other experiences I've had weren't visual. More like the absence of vision (as well as the other senses and the sense of self). I've felt "one" with everything during those times. Experiencing that selfless unity has deeply impacted my view of the Force and what it is.

As for the mushrooms -- be careful messing with the chemicals in your brain -- you only get one.

I've got nothing against the use of plants in spiritual practice, some report great success with them, but I have seen a few people driven "over the edge". Be safe!
First IP Journal | Second IP Journal | Apprentice Journal | Meditation Journal | Seminary Journal |
The following user(s) said Thank You: Carlos.Martinez3, CaesarEJW

Less More
21 Oct 2019 18:00 #344698 by CaesarEJW
Replied by CaesarEJW on topic Experience of Cosmic Consciousness
Yes, that is fairly close to what I saw!
And thank you for your concern, but I know to be careful with psychedelics, no worries there.
I've heard it said that it's not the psychoactive substances that can cause an ill-fated experience, it's the baggage that you bring with you that can harm you, so to speak.
“Muddy water is best cleared by leaving it alone.” - Alan Watts

TheDude wrote: some report great success with them, but I have seen a few people driven "over the edge". Be safe!

I can't endorse the use of such things. I too have heard of people finding a sort of enlightenment from them, but I believe those experiences can be achieved with much meditative practice.
TO THINE OWN SELF BE TRUE
The following user(s) said Thank You: TheDude

Less More
28 Oct 2019 04:47 #344913 by CaesarEJW
Replied by CaesarEJW on topic Experience of Cosmic Consciousness
"If you get the message, hang up the phone. For psychedelic drugs are simply instruments, like microscopes, telescopes, and telephones. The biologist does not sit with eye permanently glued to the microscope, he goes away and works on what he has seen." — Alan Watts
“Muddy water is best cleared by leaving it alone.” - Alan Watts